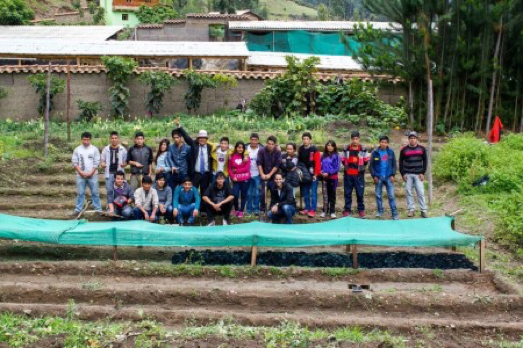 The community of Huari, Peru is largely made up of farmers, whose lives revolve around the natural environment. The community also relies on the environment for tourism, making their livelihoods doubly dependent on forces both within and beyond their control.

In an effort to care for and protect the environment it so heavily relies on, the municipality of Huari recently created a new position, Director of Environmental Initiatives. It was filled by former U.S. Peace Corps volunteer, Carlos García.

“The goal of my job,” Carlos says, “is to help a community that is heavily dependent on its environment but don’t understand what or why things are happening around them. One of the projects I have launched in my community is a free education program by way of environmental videos and lectures, where I coordinate the screening of science documentaries.”

Each week there is a guest lecturer speaking speaking in conjunction with the videos, explaining how the subject is important to Huari and to Peru. The line-up of speakers includes scientists from the Smithsonian Museum, NASA, Hudson Riverkeeper, RUNA Foundation, NRDC, Conservation International, National Cave and Karst Research Institute, and past TEDTalk speakers.

“The programs are exciting for Huarinos. For some, it’s a family affair and for others it’s a place to meet up with friends,” says Garcia. “The audience is varied and we have kids from three-years-old to adults in their 70s. One of my main goals in creating this program was to peak people’s interests in the environment and have people start asking questions.”

A major component of the initiative is to help set an example of female leadership in science. “I specifically wanted to reach out to women leaders in science to speak at our series,” Carlos says. He and the community are reaching out to women and girls who have been limited in their science education due to the emphasis of traditional gender roles.

“I wanted to let the women and girls of Huari know that their end goal could be more than being wife or being in traditional ‘women jobs’. They could study sciences and math as well,” Carlos explains. “One of the most rewarding moments in my career and life was last week when a university student came up to me after the video lecture and told me that she realized she could understand ‘tough’ scientific concepts that were explained in the videos and by the lecturers, and it made her decide to change her studies from tourism to environmental engineering. Something that she was always told was a ‘man’s job’ and that she would never understand.”

He added: “By simply showing some videos and hearng amazing professionals talk, we’ve now changed this girl’s future, hopefully for the better. If during my time on this earth I can change just one person’s life for the better, I know I will have left this world a better place than when I came into it. That’s my ultimate goal.”

Carlos, in fact, has a led a life dedicated to leaving the world a better place. Before serving in the Peace Corps, he worked in New York City for a personal injury law firm, working exclusively with 9/11 victims. He was the litigation science adviser, combining his desire to help others with his love for science.

“The very first time I worked in a science capacity was at the age of 13 when I was awarded an internship at the American Museum of Natural History, Aeronautic and Space division,” he recalls.

“I would say the biggest life-changing experience I had when I was younger was in between high school and college, when I decided to go to Africa to work,” he said. “I had already traveled all around Europe and I wanted to go somewhere I had never been and help people who really needed it. So, by myself, I lived and worked with locals in Uganda for two months at orphanages and schools in slums, and I did the same in Kenya for three months. I repeatedly got sick and got a bad case of malaria, but it was worth it. Seeing that I could actually make a change had a huge impact on me and changed the course of my studies and future work.”

During his college career, Carlos worked in Barcelona, Spain at a renewable energy consultation firm and the next summer he worked at an environmental NGO in Colorado. The next summer and school year he worked at a law firm in Baltimore. After college he moved to New York to work for the Hudson Riverkeeper.

In Huari, Carlos can now focus his passion on helping people and the environment, incorporating his science background. “When I got to Huari, I knew I wanted to promote environmental education in some way, and after thinking about it, I came to the realization that ‘Why couldn’t the people of Huari have the same level of educational exposure as I had?’”

“The population is mainly made up of farmers,” he says. “Most are under-educated but are motivated to learn, as well as be extremely sincere and welcoming.” Their lives are grounded in traditional beliefs that Carlos hopes to bridge with a more expansive knowledge of their environment.

“Traditional beliefs are passed on generation through generation. Too often, they don’t ask questions or research the topic themselves, they take what they are told as fact. One of the most concerning beliefs that I’ve encountered, which helped spur the program, was that ‘paper comes from plastic bottles’ and that we need to use as much plastic as possible to help create more paper. obviously, some of these beliefs can be damaging to the environment, as well as the population in general.”

“Climate change is one of the most evident things happening around the people of Huari,” Carlos says. “They don’t really understand it. They don’t understand why seasons are changing out of pattern, why animals that used to live near Huari aren’t here anymore, and why their crops are not growing as efficiently as they used to. This week Andrea Becerra of the National Resource Defense Council gave a great introductory lecture on the greenhouse effect and the community was astonished. They had no idea that driving cars attributed to climate change. It’s these kinds of concepts that, when the community learns about them, give them the ability to make informed decisions about how they want their and their community’s future to turn out.”

But the videos and lectures are just the tip of the iceberg, Carlos says.

His current workload consists of a native tree reforestation program, the international lecture and video series, an international exchange program for the schools in the area with the aim of creating environmental initiatives, and creating and redoing all of the municipality’s websites.

“I am a huge on the concept of sustainable development so in creating this program I involved as many local ‘players’ as possible,” Carlos says. “SERNANP, the Government of Peru’s national service of natural areas, the local university, and the municipality are all a part of the program. What I would love is to return a few years after I leave and find that the program is still running and is even more effective than when I left it. Ultimately, I want this to be their program, not mine.”