A couple of weeks ago, a high school History teacher told me, “I learned most of my
English grammar by studying Latin.” I can relate to and agree with this through my study of Spanish.

I started studying Spanish two decades ago. The first word I learned was from the mother of a friend from Mexico. She spoke no English. One afternoon I went to his house and he wasn’t home. His mother told me something in Spanish and it was clear from the look on my face that I had no idea what she had said. She then continued to repeat “Biblioteca, biblioteca” as she pointed up the hill toward the library. When I arrived at the library, I found my friend and I realized I had learned my first Spanish word.

From that day, I decided to make it a point to learn Spanish. I took Spanish through high school and college. I studied Spanish in Guatemala for three months, working one-on-one with a Guatemalan teacher, five days a week, eight hours a day.

After Guatemala, I volunteered at a maternity home where many of the clients were Spanish speakers. I tutored students in Spanish at a college. Over morning coffee, I spoke Spanish with a friend of Puerto Rican descent. Then, throughout my English graduate studies, I sat-in on as many Spanish college courses as I could.

I never planned to be a Spanish teacher or permanently live in a Spanish-speaking country. I wanted to learn a new language because I was aware of the well-known benefits of doing so: a greater ability to complete analytical tasks, an 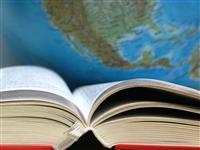 introduction to a new culture, a competitive edge in the job market, and so on.

When I completed my MA in English, my family and I moved to Ecuador. There I took Spanish classes, but most of my time was dedicated to teaching English. As a new teacher in a classroom, I found that teaching the English language was not much different than learning the Spanish language. I discovered that all my years of studying Spanish helped me to better understand the English language.

Anne Merritt points out in “Why learn a foreign language? Benefits of bilingualism” that learning a foreign language draws our focus to the mechanics of language: grammar, conjugations, idioms, and sentence structure. Merritt says, “This makes you more aware of language, and the ways it can be structured and manipulated. These skills can make you a more effective communicator and a sharper editor and writer.”

If we want a better hold of English and we want to improve our reading and writing skills, we should remember the words of Johann Wolfgang von Goethe: “Those who know nothing of foreign languages know nothing of their own.”